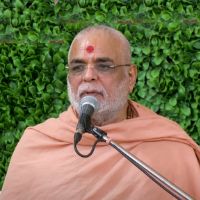 Shastri Shri Balkrushnadasji Swami, alongwith his Sant Mandal settled in Fareni in 2003 AD. Fareni, where Lord Shri Sahajanand Swami had declared His own Vedic Mantra “SWAMINARAYAN” on 31st December, 1801, became the work-place (Karya-Kshetra) for Shastri Swamiji. He founded Shri Sahajanand SanskarDham at Fareni and started the Social, Religious, Cultural and Educational activities. His main focus has been the YOUTH. He believes that the YOUTH of the present era has got a tremendous capacity and strength and if this is diverted and utilised for the welfare of the society, can create wonders. He motivated the young generation through monthly Assemblies (Satsang Sabhas), yearly Workshops (Yuva Shibirs) and continuous moving (VICHRAN) from place to place at the every nook and corner of the country and out of the country as well for the upliftment of the people.